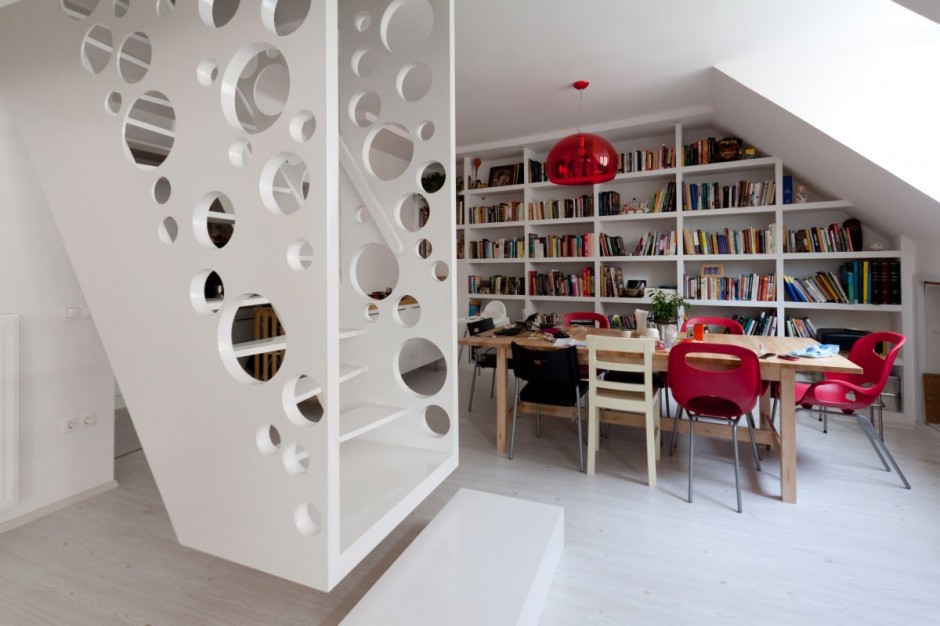 Biljana Jovanovic, a croatian architect based in Budapest, Hungary, designed Emmental Stairs for a family apartment.

The Emmental stairs was designed for a young creative family with an equisite design taste and an eye for details and their two children. They were just starting the refurbishment of their apartment and wanted interior stairs that would harmonize with the historic ambiance of the apartment and their aesthetic requirements, but also add an extra touch to their living space.

Since it is centrally located in the apartment, it inevitably had to be treated as the focal points of the space. Its suspended encasement divides living room from dining room and kitchen. It provides certain level of intimacy without isolating these spaces. The circular perforations on the sides let the sunlight seep through, creating surfaces that change the dynamics of the whole interior. The motif for circles was inspired by large windows that another focus point of the apartment. As they remind a lot of holes in cheese, the project was named Emmental Stairs.
Apart from being used for its original function, this “object” features a playful touch for children as well. It is used as an inspirational toy, that boosts their imagination and develops their creativity.
Due to technical restraints the slope of the stairs had to be kept quite steep. This was somewhat eased through usage of angled treads that complements the visual effect of the stairs.