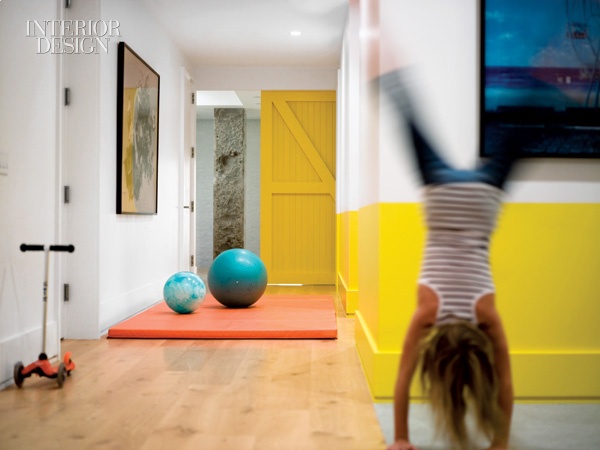 Always courageous with color, Ghislaine Viñas has revved up mismatched dining chairs with chartreuse vinyl and swathed a living room’s walls in red suede. But in a New York triplex for a father and three young sons, she has bravely gone where even she has never ventured before. The color scheme developed by Ghislaine Viñas Interior Design embraces eyebrow-raising doses of red, orange, yellow, green, and blue. “It’s intentionally a bit wrong,” she explains. “It pumps some energy into the space.” Not that the 5,600-square-foot apartment didn’t have a lot going for it from the start. It’s one of two remarkable residences in a 19th-century warehouse transformed beyond recognition by the real-estate developer DDG Partners-the triplex being the lower unit. Its ground level encompasses the living and dining areas and the kitchen. The basement contains a den, a playroom, a gym, and guest quarters. On the second story are family bedrooms and a home office. 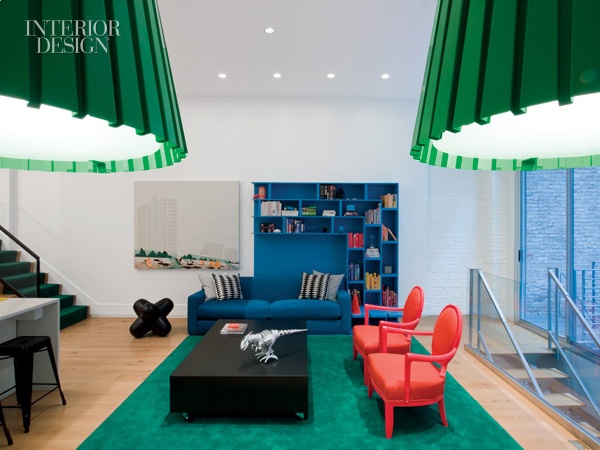 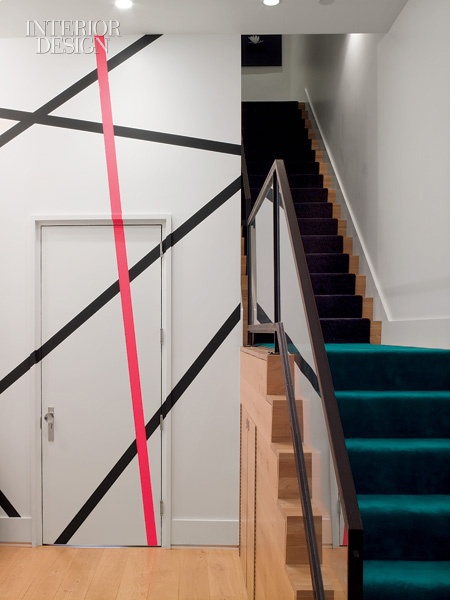 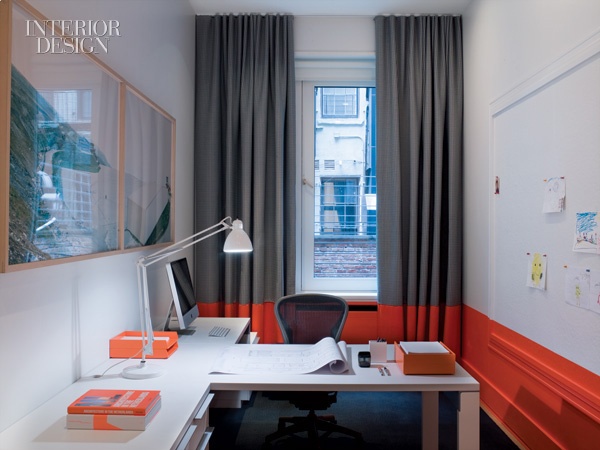 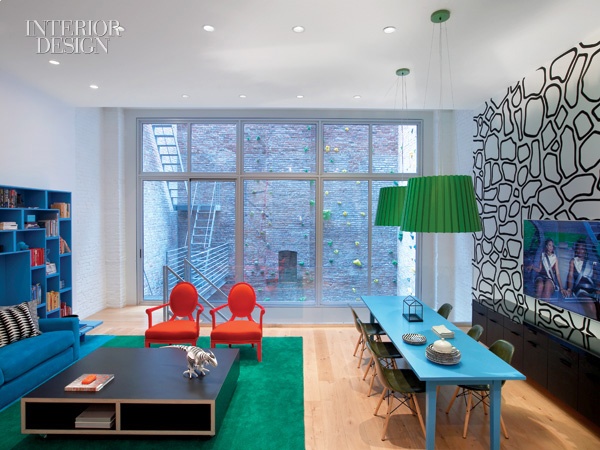 Because natural light was limited on the bottom two levels, DDG’s cofounding partner and head of design and construction, Peter Guthrie, and lead project architect, Jeshua Paone, opened up the north-facing rear of the apartment with wall-towall windows to capture sunshine bouncing off a neighboring building. Hugging this window wall without obstructing it is a striking staircase, a single steel stringer with open risers and cantilevered treads. The openness is both architecturally exciting and kid-friendly, with plenty of room for restless boys to roam-and to run and jump and bounce balls. Scooters are possible, too, on the rift-sawn white-oak floors.
Still, the triplex’s glass expanses and yawning spaces presented a challenge for Viñas. The first time she walked in, she thought, How am I going to make this homey? Her answer turned out to be color-blocking, a pop art ploy that’s been showing up in fashion lately. 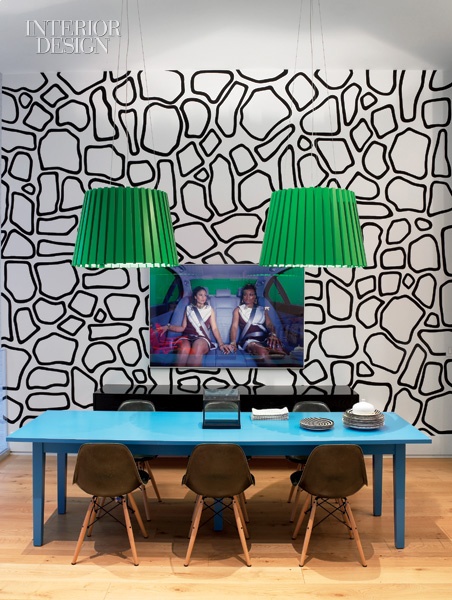 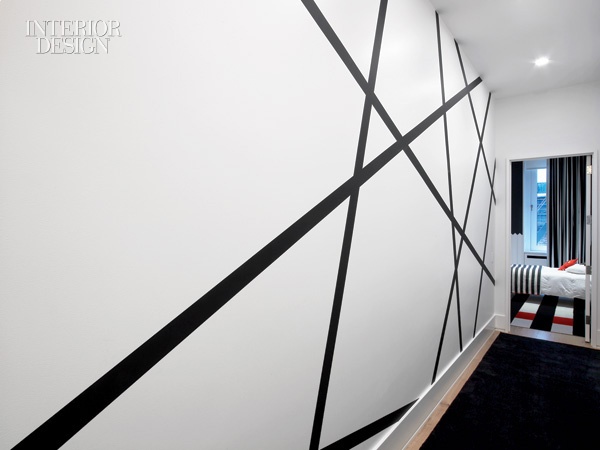 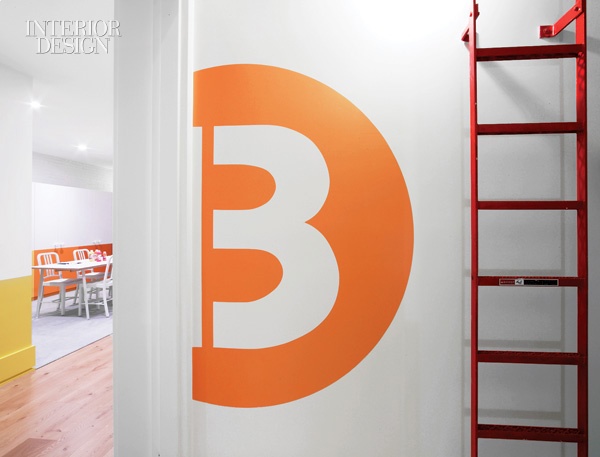 Sweeping around the home office, a thick band of tangerine orange saturates everything in its way: Lower walls, a sliver of a tackboard, and a radiator cover are all painted orange, while the lower segment of the curtains is orange wool. She took a similar approach in the master bedroom, where the wainscoting, upholstered headboard, and bedside tables are enveloped in Yves Klein blue, a shade she had never appreciated until she saw it in a friend’s sweater.
In the living area, where the ceiling reaches almost 13 feet, she made part of the sofa and the bookcase behind the exact same turquoise, so they read as a single element with the necessary scale. Nearby, two armchairs from the owner’s previous apartment are jolted to life by fluorescent-red upholstery. Underfoot is a shag rug in emerald green, another color she hadn’t used before. “I was trying to get outside my comfort zone,” she says.
Essential to this daring deployment of color is a white backdrop, as she’s quick to point out. Walls are painted a crisp white, new plasterboard and old warehouse brick alike. “As much as I love color,” she admits, “I love white more.” She’s also partial to black-and-white, a highcontrast combo seen in the graphic hits that punctuate the apartment. 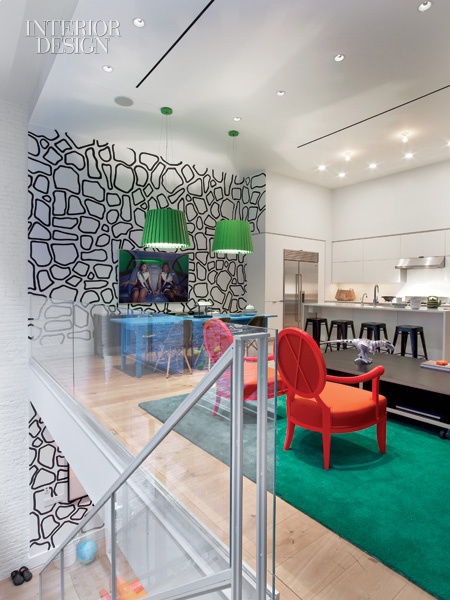 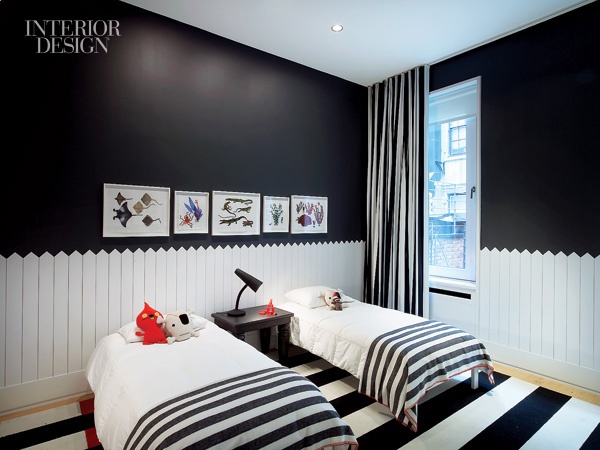 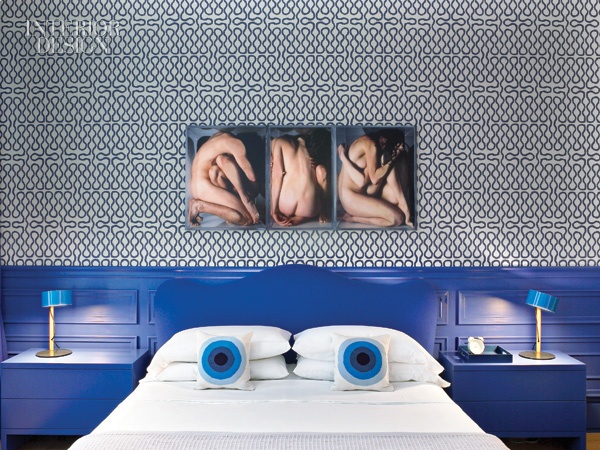 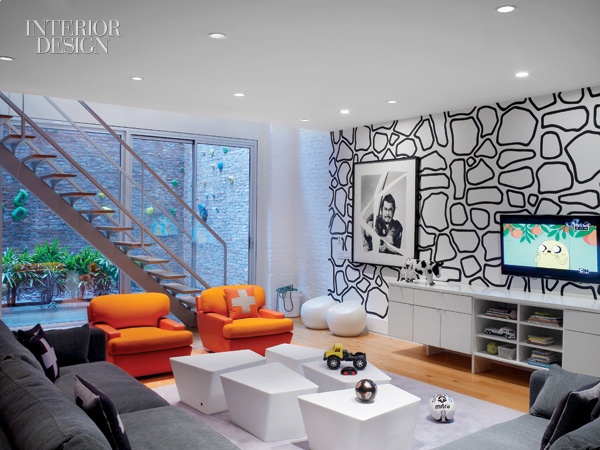 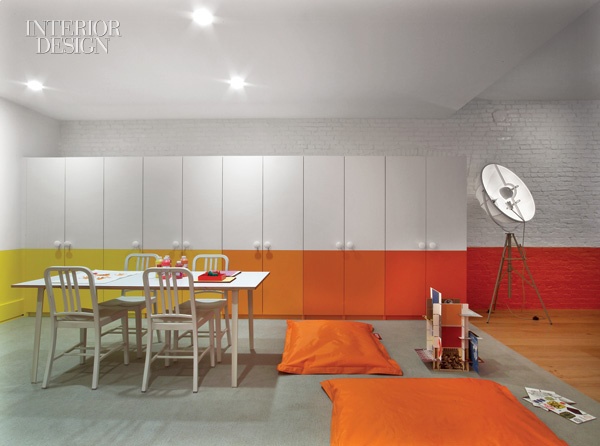 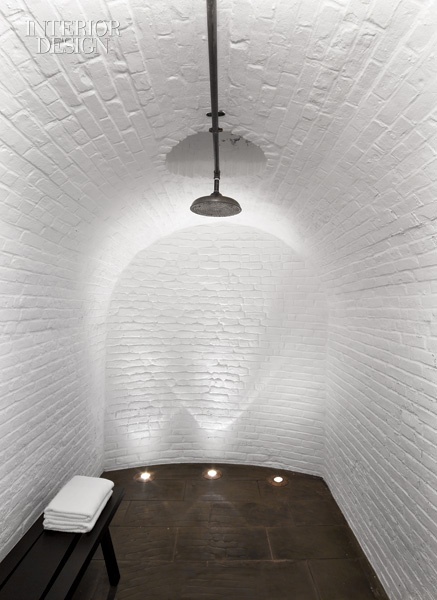 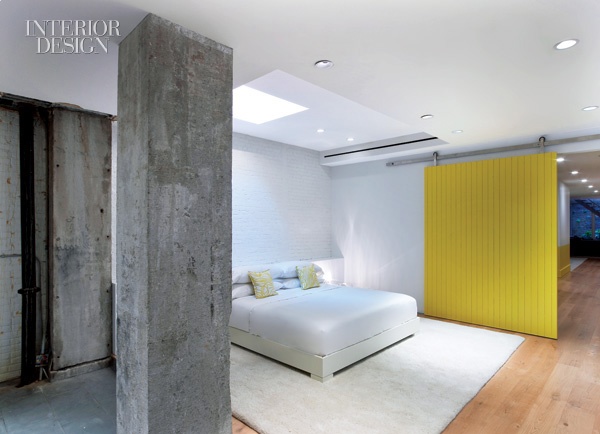 The black outlines on the white doubleheight wall rising from the playroom through the dining area resemble a cartoon version of stacked stones. (She first doodled the design on paper, then had decorative painters blow up the drawing with a projector and trace the result.) At the entry and in the hallway upstairs, intersecting lines are strewn across the walls, like giant pickup sticks, adding dynamism to what could have been dead space. In the room shared by the three boys, she unfurled black-and-white stripes in the form of curtains, throws, and carpet.